Covalent Bond is a type of chemical bonding that atom either share or transfer electron with each other. It is the attraction that holds both atoms that share a pair of electron. Covalent only form between the atom of non metal. The share electrons are attracted to the nuclei of both atom. The cause of this bond is due to the reason that they give atoms a more stable arrangement of electrons. For instance, look at the Hydrogen. It only has one electron atom. Once it shares the electron with another hydrogen, they will have two electron atom. The shared electrons are attracted to both hydrogen nuclei. This force of attraction holds the two atoms together as a molecule of hydrogen. There are two types of covalent bond.

The first type is called polar covalent. This type of bond forms electrons are not shared equally between the two atoms. Let’s look at the example of water compound(H20). The oxygen atom attracts the shared electrons more strongly because its nucleus has more positively charged protons. As a result, the oxygen atom becomes slightly negative in charge. The hydrogen atoms attract the electrons less strongly. They become slightly positive in charge. It’s like when you are working hard in a team, you are tired, but your teammate is lazy and only produce little energy, so your partner is not really tired.

The second type of covalent bond is called non polar bond. It forms when both atom gets electrons shared equally.

My STEM class is lead by Teacher Da. He teaches us the lesson from a website called CK 12. Last year, my class was studying Earth Science such as the earth’s surface, earth mineral, rock, and other more stuff. Instead of study studying more about those kinds of stuff, in this term from August to October, we study physical science. Let me share you one of the lessons that I’ve learned.

Last few weeks we study about The Inside Atom, but instead of reading the website about what atom actually is, my teacher gives us a link to read about atom family. It is not a boring lesson because they were comparing the things inside the atom to something similar to us, human.

In the Matterville, there is a place called Nucleus Arcade where the two members of atom family like to hang out together. Perky Patty Proton is the same as some other sister. She is quite large with a big smile on her face and eyes that sparkle (+). She is happy and has a very positive personality. Nerdy Nelda Neutron is one of the members of the family. She is quite as large as Patty Proton, but she is the opposite. She has a boring flat mouth and eyes with zero expression. Her family always show apathetic and neutral about everything. Nerdy Nelda Neutron and perky Patty Proton always spend time together at the arcade. Around the nucleus arcade, you will find a couple of roadways that another atom family live. Enrange Elliott Electric like to chase around the arcade with a very angry face. Elliott Electron is much smaller than Perky Patron and Nelda Neutron. Elliott Electron is always chasing angrily because his bigger relatives won’t let him join the arcade. He has a frown on his face, eyes that are squinted with anger, and a very negative (-) attitude. Elliott Electron has a frown on the face, eyes that squinted with anger and has a very negative attitude. The first energy street can only hold only two Electron brothers. The second energy street, called the Energy Freeway, can hold 8 brothers. The third energy street, called the Energy Superhighway, can hold 18 of the brothers. The morale of Matterville is stable as long as each negative Electron brother is balanced out by one positive Proton sister. If one of the Elliott Electron is kidnapped, one of the Perky Patty Proton will be disappeared or be kidnapped too. The number of people in Matterville depends on the Proton and Neutron families.

Do you see that? The paragraph is not telling like a lesson. Instead, they were told like a story, so that it is not very boring to learn. When I study this lesson it was very fun and educational. After you read this I hope you learn something too. 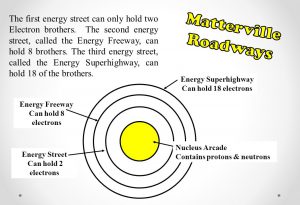